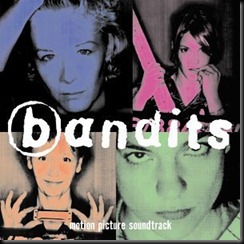 A German film, a bit like Thelma & Louise with music! Four female convicts form a band as part of a criminal rehabilitation program their prison is testing out. The band — the Bandits — get a chance to perform at a police event outside the prison, but after one member impulsively attacks the Jerkass cop who rides with them to the ball, they stage an escape. Broke and on the run, they ship their demo out to a record company and soon find themselves cult idols.

All the music in the film, incidentally, was written and performed by the actresses themselves.

Not to be confused with the other film called Bandits, starring Bruce Willis and Billy Bob Thornton.