Anime / Pokémon: Secrets of the Jungle 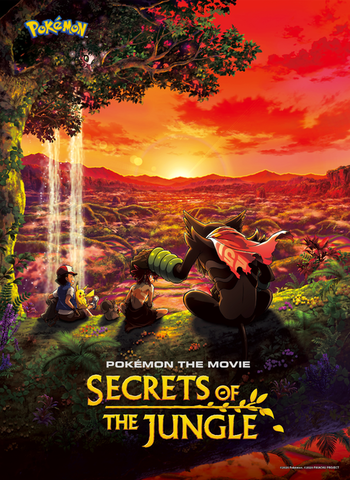 Pokémon the Movie: Secrets of the Jungle is the 23rd Pokémon movie produced by OLM Incorporated, set in the same continuity as Pokémon: I Choose You! and Pokémon: The Power of Us. It was once again directed by Tetsuo Yajima, with the script written by franchise mainstay Atsuhiro Tomioka.

Ten years prior to the events, the Mythical Pokémon Zarude finds a human baby alone in the Forest of Okoya. The Zarude leaves its pack to raise the child. Ten years later, the child, named Koko, is an adventurous jungle boy, but one day while swinging on vines, he crashes into a metal pipe and ends up in Milyfa Town, where he meets Ash Ketchum and Pikachu, who are touring the Biotope Corporation, a company looking into the water in the forest run by a scientist named Dr. Zed. However, the scientist isn't what he seems...

The film was released in Japan on December 25, 2020. It was supposed to have a July release date, but it was pushed back due to the COVID-19 Pandemic. It was released in English on Netflix on October 8, 2021.

Secrets of the Jungle provides examples of: