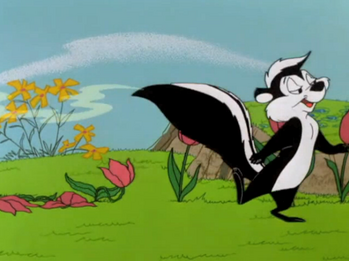 Pleasant spring flowers die in seconds, animals run in horror, the wallpaper peels, everyone's hair stands up before falling off, and when The Pig-Pen finally decides to take a bath, the bathwater kills the fish and leaves a rainbow sheen on the surface of the water. No amount of tomato soup could do anything about this stank.

The smell is usually a Visible Odor. If it is someone's mouth smell, see You Need a Breath Mint. When weaponized, it was made into a deadly Stink Bomb and it is often used for evil because Uncleanliness Is Next to Ungodliness.

Compare Mirror-Cracking Ugly, when its physical appearance that hurts one's surroundings, and Gale-Force Sound and Glass-Shattering Sound, when it is sound. Not to be confused with Smells of Death, where a person on the verge of death have a specific scent. Related to Gasshole, Fartillery and Walking Wasteland.