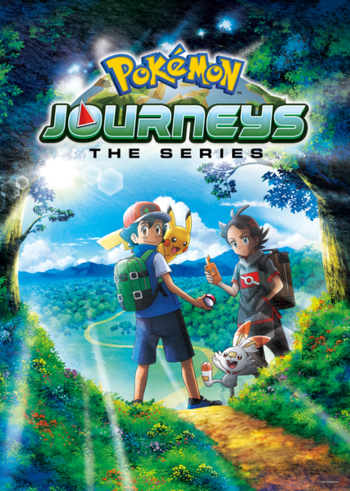 Pokémon Journeys: The Series (ポケットモンスター Pocket Monsters) is the seventh Pokémon anime series that premiered in 2019 in Japan and in 2020 in America and currently ongoing. Rather than just taking place in the region of Galar, Ash travels across all eight regions to compete in the World Coronation Series. Along the way, he's accompanied by his new friend and co-protagonist Goh, whose dream is to catch all the Pokémon in the world, especially the elusive Mythical Pokémon Mew.
Advertisement:

Unlike previous eras, this series has no subtitle in Japan and has had episodes involve travel between all existing regions — although locations, Pokémon, and aspects of Pokémon Sword and Shield have been prominently featured.

Cinderace and Lucario Together

Thanks to Meowth's gadget, Cinderace and Lucario's hand are stuck together and they need to work together.

Cinderace and Lucario Together

Thanks to Meowth's gadget, Cinderace and Lucario's hand are stuck together and they need to work together.