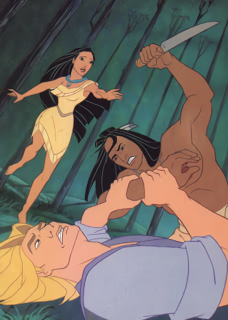 Geez, Kocoum, take a chill pill!
"I was the one they cheered before Wolverine. Now he’s their hero — a stranger!"
— Kyioek, X-Men: The Animated Series, "Cold Vengeance"
Advertisement:

The Mighty Whitey has arrived in the village of the Magical Native Americans and is Going Native. Thanks to his inherent specialness, he quickly becomes an Instant Expert at all the natives' skills and traditions, and is in a fair way to winning the respect, and even adulation, of the natives. Oh, and the hand of The Chief's Daughter too. At this rate, he may even become Of the People. Is there anybody that doesn't love this guy?

That's where the Native Rival comes in.

Almost always a Noble Savage (unless he's a Native American Jerk Jock instead), the Native Rival has been born and raised in the ways of his people and is frequently their greatest warrior—until the arrival of the Mighty Whitey. Expect him to be frustrated that his Hard Work Hardly Works, and outright hostile to the Mighty Whitey. Part of his hostility is likely rooted in a romantic rivalry over The Chief's Daughter, who at best he'll be the Hopeless Suitor or Unlucky Childhood Friend to and at worst be her Disposable Fiancé, often via an Arranged Marriage. Alternatively, he may be the love interest's older brother or some other relation.

Though it matches best with the Mighty Whitey trope, this is also found when the protagonist is not a white man, but is still an "outsider".