My Sister Is Off-Limits! 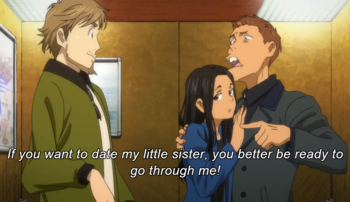 "And then my dad! And then my mom! And then my second-degree cousin..."
"GET OFF MY SISTER!"
— Ross finding out Monica and Chandler are sleeping together, Friends, "The One Where Everybody Finds Out"
Advertisement:

If you are friends with a man for more than 24 hours, then dating his sister is off-limits without asking permission, and sometimes forever. Some reasons behind this are:

Not uncommonly, the sister tells her brother to get lost, or otherwise actively ruins his attempts to prevent the potential boyfriend from dating her. After all, she may not take kindly to anyone — not even her brother — trying to control who she can and cannot date. This may lead to the brother trying to save face with If You Ever Do Anything to Hurt Her... and then backing off.

It's Truth in Television, as most any guy with a sister can tell you.

While the title says "sister," variations of it also include mothers and other female relatives (such as cousins), and for girls, the Gender Flipped "My Brother is Off-Limits." This doesn't include daughters or sons, because Overprotective Dad and My Beloved Smother, respectively, already covers that. Exes fall under The Bro Code instead.

This may also be a symptom of a character having a Big Brother Instinct. Could lead to a Knight Templar Big Brother. This trope is almost indispensable for any Brother–Sister Incest works, where it builds the initial Incest Subtext in story. Contrast Best Friends-in-Law, where the guy is all too happy for his good friend to end up with his sister. A My Beloved Smother might have the same feelings towards her child. Unrelated to Big Brother Is Watching. (although...)