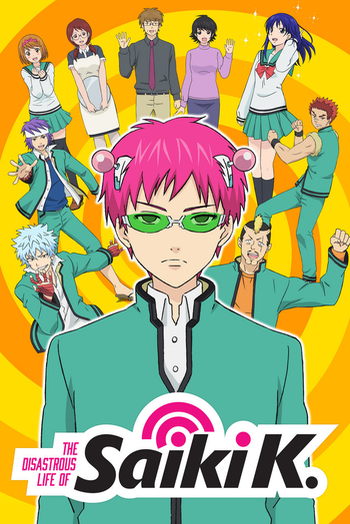 Kusuo Saiki is an Ordinary High-School Student...or at least he tries to be one.

He's actually a boy with Psychic Powers—an incredibly powerful boy with every imaginable psychic ability. If he wanted to do so, he could wipe out humanity in only three days.

It sounds like he is perfect and has everything, right? Wrong! He can't shut off his powers, therefore his life is void of surprises, challenges, or sense of accomplishment. He also needs to avoid social interaction, both because he wants to keep his powers secret and because he thinks of himself as too different to relate to normal people.

Unfortunately, life has other ideas.

The Disastrous Life of Saiki K. (斉木楠雄のΨ難 / Saiki Kusuo no PSI Nan) is a gag series by Shuuichi Asou, published by Shonen Jump since 2012. It follows Kusuo's attempts in living quietly, hiding his powers and avoiding standing out. It's something that would be easier if not for his quirky parents and a number of quirky classmates who insist on being friends with him. Cue lots of inner snarkery.

The series concluded in 2018, followed by a short series of Yonkoma and then two final chapters published in Jump Giga. It has a couple of anime adaptations: a 2013 web-anime developed for the Jump LIVE app, and a TV anime for the Summer 2016 Anime season, this time produced by JC Staff and directed by Hiroaki Sakurai. A second season of the anime premiered on January 17, 2018. The last anime adaptation is currently licensed by Funimation in the U.S. and is divided in four minute "shorts" that are aired daily during the weekdays, and collected in twenty minutes "episodes" every Sunday. This anime wrapped up with a special covering the last few chapters of the manga, released in 2019. The last anime series, titled The Disastrous Life of Saiki K. Reawakened was produced by Netflix and adapts chapters not covered by the first three seasons, as well as the epilogue.