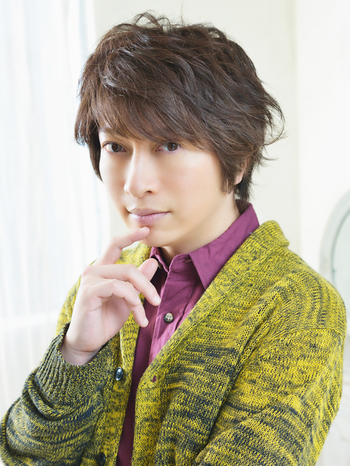 Daisuke Ono (born May 4, 1978) is a seiyuu who burst onto the scene thanks to his role as Itsuki Koizumi in Haruhi Suzumiya, like several other people. He has quite a bit of vocal range, going from Hot-Blooded to The Quiet One on a whim. Most of the characters he voices tend to be Bishōnen, as shown with his guest appearance in Lucky Star. (He's also one in real life to boot.) His popularity in recent years skyrocketed after he landed the role of the massively popular Jotaro Kujo (and Star Platinum) in the JoJo's Bizarre Adventure: Stardust Crusaders TV anime.

As one of a number of seiyuu who have done multiple characters for 07th Expansion, it might be wise to watch him closely.

In the fourth Seiyuu Awards, he won the title of best male seiyuu for his role as Sebastian Michaelis in Black Butler.

Daisuke is also part of the music industry. He has about six singles (Amaoto, Manatsu no Spica, Kinmokusei, Netsuretsu ANSWER, DELIGHT, and Lunar Maria), one mini-album, titled Hinemosu, and one full album, titled Kazehana. He also hosts a radio show called Dear Girl ~stories~ (as OnoD) with Hiroshi Kamiya, which is very popular in Japan and has even spawned a manga, two DS games, and two feature-length films. As of late, Hiroshi and Daisuke have been cast together in anime (most of the time as foils) way too many times to count. Also, arguably coming close in second with shared roles tends to be another "Daisuke", who happens to be Daisuke Kishio.

Not to be confused with either Kensho Ono or Yuki Ono, though he has worked with them.