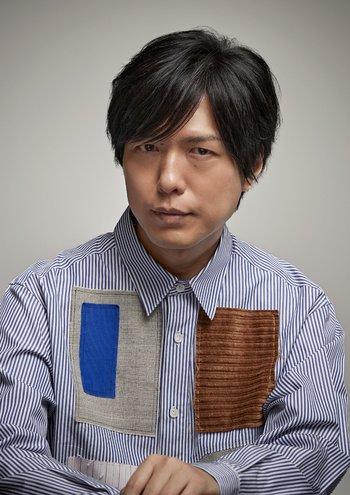 HELLO EVERYBODY... I'M IN DESPAIR! THIS PARTICULAR PICTURE OF MINE HAS LEFT ME IN DESPAIR!
"This is a description extracted from Hiroshi Kamiya. If you add roles, it turns purple." note This was in Episode 10 in the first season, when Itoshiki-sensei taught that extracted potato starch turns purple when added with iodine.
Advertisement:

Hiroshi Kamiya (born January 28, 1975) is a man known for his dignified voice which makes him quite the go-to guy for those types of well-spoken characters. About personalities, however, it's a different story. His characters can be noble, cold, super smug, or even just plain hilarious. Truly a Man of a Thousand Voices.

Has a tendency to appear in works by Studio Shaft. He's played four lead roles in series they've produced, as well as a Relationship Voice Actor in some series with Chiwa Saito. He also seems to have a relationship with Kana Hanazawa. Also with Daisuke Ono through their radio show Dear Girl ~stories~ (as HiroC), as well as Romi Park in a few other roles. In addition, he shares many roles with Yūki Kaji, normally playing the mentor character to Kaji's Naïve Newcomer (Attack on Titan, Noragami).

"What?! Even if I put the mark-ups, it still doesn't color the words purple?! That goes against the page header, and I told the tropers that it's going to turn purple when I add roles! Ugh...uhh...aah...I'M IN DESPAIR! THE COLOR-FAILURE OF THE HIROSHI KAMIYA DESCRIPTION HAS LEFT ME IN DESPAIR!"