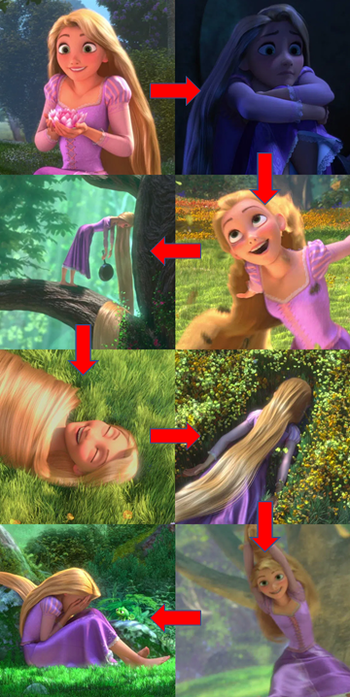 Rapunzel does this all within a minute.
"You know, I can't help but notice you seem a little at war with yourself here."
— Flynn Rider, in response to the page image, from Tangled
Advertisement:

A character whose personality isn't marked by any set mood, but by their tendency to swing between moods drastically. Sometimes (if the characters around them are lucky) there's some sort of warning of an impending mood swing — or at least a recognizable cause — but there may just as easily be no warning whatsoever.

Frequently this is combined with emotional lability,

Though they may be referred to as "bipolar", their mood swings are generally much more abrupt and frequent than the periods of mania or depression associated with real-life bipolar disorder.

This is also a very common aspect of borderline personality disorder

, and it is also a common feature of traumatic brain injuries. We have our own Useful Notes on Bipolar Disorder as well.

This is a stereotypical trait of women who are currently menstruating or suffering from PMS. This is Truth in Television for many women, though it is neither as universal nor as extreme as lots of fiction portrays it. A common manifestation of monthly emotional instability, both in fiction and in Real Life, is for the affected woman to flip-flop between being Prone to Tears and having a Hair-Trigger Temper. Pregnant women are also known for being Mood Swingers.

The Mood Swinger as a Love Interest frequently fills the role of the Tsundere. This is also a common trait of The Sociopath and The Caligula.

For even more extreme cases, see Hair-Trigger Temper, Split Personality, Jekyll & Hyde, The Sociopath, Tsundere or Yandere. Not to be confused with Mood Whiplash, which is a trait of the storytelling, not an individual character. They may also end up singing a Song of Many Emotions.