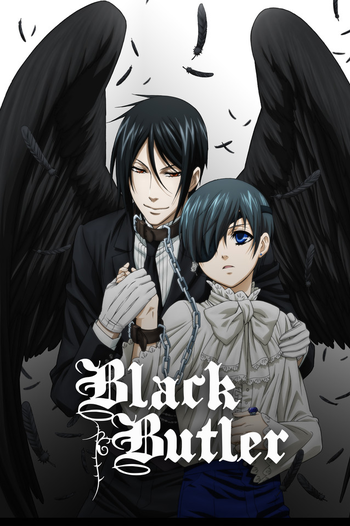 Black Butler (Kuroshitsuji in Japanese) is a Shonen manga and companion anime series (although it's pretty obviously looking for a crossover Shoujo audience). Originally created by Yana Toboso, the manga began serialization in Monthly G Fantasy in 2006, and is still ongoing.

The Phantomhive family is a respected and distinguished house in Victorian London. Despite a mysterious fire killing off the previous Lord and Lady Phantomhive, their twelve-year-old (later thirteen) son Ciel Phantomhive has managed to rebuild the family legacy, creating a massive toy and candy company within just three years, and serving the Queen as a major contributor to England's black-ops.

It does help that Ciel contracted a demon to serve him: Sebastian Michaelis, whose skills range from dispatching any threat to baking the perfect pastry. He has agreed to aid Ciel until he "succeeds in all of his tasks", upon which Ciel's soul belongs to him. So Ciel leads a double life, his service to the Queen combined with his own dark supernatural dealings, and maintaining the peace of the Phantomhive Mansion and its less than serious staff.

Mix and stir Hellsing and Count Cain and a pinch of Batman and Loveless, at least toward the beginning. No, seriously.

An anime adaptation was produced for the Fall 2008 season by A-1 Pictures, although it detours away from the manga's storyline very early on. A second season was produced two years later, with an original story, new characters, and most of the previous season's cast returning. Both seasons were dubbed and distributed in the Americas by Funimation.

A live-action movie starring Mizushima Hiro, Gouriki Ayame, and Shirota Yuu was released on January 18, 2014. Taking place 130 years after the events of the manga, in the year 2020, Western and Eastern cultures have blended and 17-year-old Shiori Genpo, a distant relative of Ciel, is the head of the Phantomhive/Genpo estate and Phantom/Funtom Corporation after her parents were mysteriously assassinated when she was a child and she was subsequently kidnapped. She disguises herself as "Kiyoharu Genpo" and, just like her relative before her, returns with a butler named Sebastian Michaelis at her side, whom she has contracted to help her obtain revenge in exchange for her soul. The movie follows Shiori as she is tasked by the Queen of the Western Nations to investigate a slew of serial mummification deaths, also referred to as "The Devil's Curse".

A third season of the anime, covering the Noah's Circus arc and ignoring everything after a certain point from the anime's side, aired July 2014 as part of the Summer 2014 anime season, followed later in the year by a two episode OVA (at 50 minutes per episode) covering the Phantomhive Manor Mystery arc. An anime movie, an adaptation of the Ship Voyage Arc, was released in 2017.

Character sheet for the anime series, the musical, and the movie is here.

A Phantomhive butler whose series can't demonstrate examples of the following tropes isn't worth his salt:

open/close all folders
Anime Only
Feedback