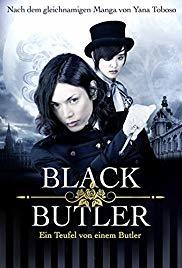 Black Butler is a 2014 Japanese Sci-Fi Horror Heroic Bloodshed Spy Fiction film based on the manga and produced by Warner Bros. and Square Enix.

In a World… where the planet is divided between empires run by Japan and Great Britain, the Queen has spies all over her rival. One of these spies is Shiori Genpo, a toy company heiress long thought dead, who has by her side a mysterious butler named Sebastian Michaelis. As it turns out, Sebastian is a demon bound to Shiori's will until he can claim her soul. The duo are tasked with investigating mysterious mummification murders, but could potentially uncover more personal secrets along the way.