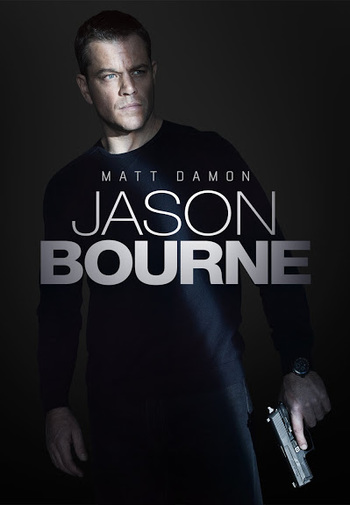 Jason Bourne. We think.
"I can tell you the license plate numbers of all six cars outside. I can tell you that our waitress is left-handed and the guy sitting up at the counter weighs two hundred and fifteen pounds and knows how to handle himself. I know the best place to look for a gun is the cab of the gray truck outside, and at this altitude, I can run flat out for a half mile before my hands start shaking. Now why would I know that? How can I know that and not know who I am?"
— Jason Bourne, The Bourne Identity
Advertisement:

A series of action films tenuously (pretty tenuously) based on the Robert Ludlum books of the same name and (with one exception) starring Matt Damon.

This series revolutionized the Spy Fiction movie genre for its simplicity and glamourless grittiness (as opposed to Tuxedo and Martini), as well as for having a smart protagonist, globetrotting (with virtually zero California Doubling), well-crafted suspense and aggressive action sequences, hand-to-hand combat and car chases especially.

The main protagonist is Jason Bourne, an amnesiac who finds himself with super-assassin skills and has to stay on the run from former employers and whoever else wants to kill him or manipulate him to evil ends. Each movie follows a slightly different story but retains some basic elements of Bourne eluding government custody, killing a fellow assassin with some household implement and going for an innovative and harrowing car chase, and features variations on Moby's "Extreme Ways" as end theme.

The success of the first three films helped influence the style of many modern action films. Examples include the gritty direction of the rebooted James Bond franchise for a time (most noticeably in Quantum of Solace) and the Taken films.

The following films (and television show) are part of this series:

There are also two major spin-offs based on the film continuity:

Extreme ways are back again
Extreme places I didn't know...