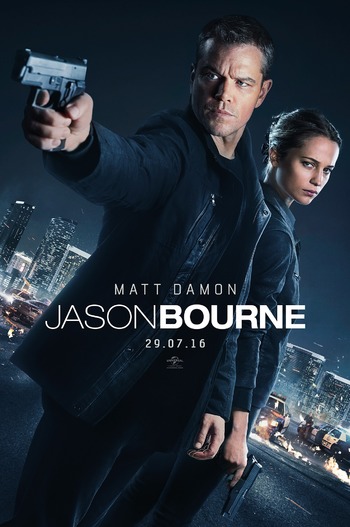 You know his name.
"You've tortured yourself for a long time now, Jason. You torture yourself for what you've done. But you don't know the truth about what they did to you."
— Nicolette "Nicky" Parsons
Advertisement:

Jason Bourne is a Conspiracy Thriller directed by Paul Greengrass and starring Matt Damon as the eponymous ex-intelligence operative, Jason Bourne, released on July 29th, 2016. It marks the fifth film in Universal's The Bourne Series, as well as being a sequel to two films: The Bourne Ultimatum, and The Bourne Legacy. Julia Stiles reprises her role of Nicky Parsons and newcomers include Alicia Vikander, Tommy Lee Jones and Vincent Cassel.

Years after regaining his memory and shutting down the program which created him in The Bourne Ultimatum, Jason has gone into retirement, trying to live quietly in the shadows. But when former handler and collaborator Nicky Parsons asks for Jason's help to find out about a new program known as "Iron Hand", Bourne finds himself drawn back again into a world of deception and intrigue, where his past still haunts him.

"You're never going to find any peace. Not till you admit to yourself who you really are."