The Film of the Book 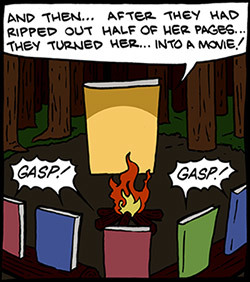 A horror movie...
"From J.K. Rowling, the author of the book series that kept Borders open for another few years, comes the movie adaptation for people too lazy to read."
— Epic Voice Guy, Honest Trailers, trailer for Harry Potter
Advertisement:

Got a hit book? Turn it into a hit film. What could be more natural? The name alone will sell tickets, the movie will bring the books back into the light for people wanting to read the original, and everybody either makes huge wads of cash or has a good time contributing to the economy. Simple, right?

Unfortunately, as many studios have found, it's not that simple. Print and film are very different media; what works for one will fall flat on the other. In print, special effects are cheap; in film, they are more expensive. In print, describing a character's thoughts is par for the course; in film, a voiceover is seldom acceptable. In print, a short story can take days to read; in film, audiences generally won't sit still for more than a few hours. In print, your award-winning author may have a way of spinning Black Comedy between dialogue; in film all their clever wordplay is fed to the dogs, making the film deadly serious. Getting round these problems means changing the story, for better or for worse.

One issue is that a typical novel is simply much too long to fit all of it in a two (or even three) hour movie, so significant parts of it must be hacked out. Sometimes entire characters may be changed, have their screen time lengthened/shortened (if not cut altogether), or important book-related plot points or dialogue may be whizzed by, creating a moment of Fridge Logic. All of this tends to a trendy belief that no matter how good or bad the movie is, "The book was better."

Sometimes though, the film is so successful the book gets forgotten over time. Other times, the original book is still read long after the film is forgotten. Most frequently though, the book will probably be republished with a cover based on the movie poster and "Now a major motion picture!" or something the like emblazoned on it.

The Other Wiki has something to say

about this kind of thing in its usual style. Adaptations like this are likely to lead to Old Guard Versus New Blood incidents.

See also The Show of the Books, The Film of the Play, The Movie.