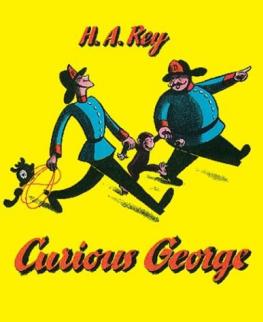 "This is George. He was a good little monkey and always very curious."
—How every book begins
Advertisement:

Curious George is a series of books and a TV spin-off, plus a movie, based on the character by Margret and H.A. Rey. George is a monkey who is found overseas in Africa by "The Man With the Yellow Hat," a father-figure who takes the monkey home with him to his apartment in the city. Hilarity Ensues when the monkey is treated like a human child, rather than a pet. The books and series are marketed to the preschooler/early reader group and attempt to give children an early grasp on patterns and other bits of necessary information about life.

The character of Curious George first appeared in another children's book by H.A. Rey, Cecily G. and the Nine Monkeys.

The original books are as listed below. There have also been a number of pastiche works, most of them out of print for years.

Curious George at the movies

Curious George has been adapted into six films; one in theaters, three straight to DVD, and two straight to streaming through Peacock:
Advertisement:

Curious George was first adapted in to a series of animated shorts in 1980 that first played during the early morning hours on Nickelodeon, and later during the Disney Channel's Circle Time block. A Stop Motion animated special titled The Adventures of Curious George consisting of two segments adapting the original book and Goes to the Hospital respectively was later made in 1982. In 2006, an animated Edutainment Show adaptation debuted on PBS. The show depicts George using science, math, and engineering concepts to solve problems on a level consistent with preschool-age children. note The quote "George is a monkey, and he does things we can't do" arose from the TV show in a conscious attempt to discourage preschoolers from causing trouble or endangering themselves by imitating George's monkey shenanigans.