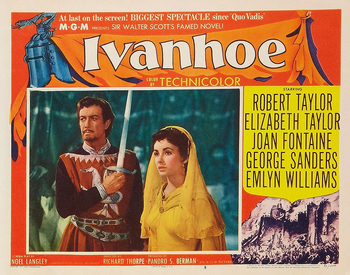 Ivanhoe is the 1952 Metro-Goldwyn-Mayer movie adaptation of Walter Scott's eponymous novel, directed by Richard Thorpe and starring Robert Taylor as Sir Wilfred of Ivanhoe, Elizabeth Taylor (no relation to Robert) as Rebecca, Joan Fontaine as Rowena, George Sanders as De Bois-Guilbert, Felix Aylmer as Isaac and Finlay Currie as Sir Cedric of Ivanhoe.

The film was nominated for three Academy Awards, for Best Picture, Best Colour Cinematography, and Best Score for Miklós Rózsa. It is part of a Thematic Series with 1953's Knights of the Round Table and 1955's The Adventures of Quentin Durward (which were also produced by MGM and directed by Richard Thorpe, and also starred Robert Taylor, and Quentin Durward was also adapted from a Scott novel), what with their similar chivalric spirit and tone and lavish production values. All three were filmed at MGM's British Studios at Elstree, near London.