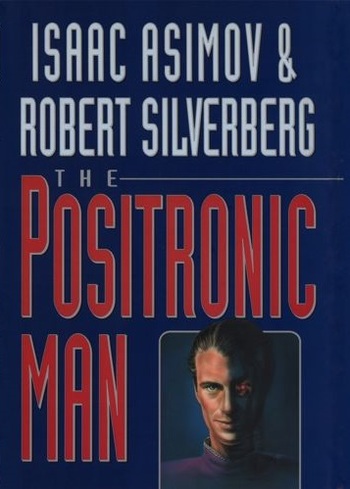 The Positronic Man is a Novel written by Isaac Asimov and Robert Silverberg, first published in 1992 and based on Dr Asimov's story, "The Bicentennial Man". Unlike the previous two collaborations, Silverberg doesn't add new chapters to this Novelization, instead lengthening each individual chapter by adding in Narrative Filigree in the form of additional character quirks and World Building.

Certain details are changed or clarified, such as Andrew Martin being originally the robot model NDR-113, and how being the inventor of the field of prosthetology brought with it incredible fame. Despite this, his struggle to be recognized as human is still hard-fought and risks disastrous consequences in failure.

The Positronic Man provides examples of: