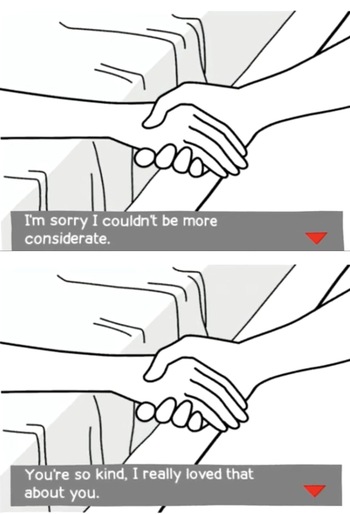 to the player character "You".note  Just for your information, the one who is lying on the bed is The Girlfriend. Don't worry, she gets better in the sequel.
"They say, the tongues of dying men,
Enforce attention, like deep harmony:
Where words are scarce, they are seldom spent in vain."
— John of Gaunt, Richard II, Act II, Scene i.
Advertisement:

Bob is dying. As his last hours on this earth approach, he calls for his daughter Alice to come to his bedside so he can give her an important message before he passes on. Once Alice arrives, there are multiple possibilities as to what Bob may tell her:

If the work is a comedy or Bob is a right bastard, he may take the opportunity to deliver a parting shot along the lines of "I never really liked you anyway!"

A Last Request, related to the confession, may follow

Then, having spoken his last words on Earth, Bob will suffer from one last fit of his Incurable Cough of Death and give up the ghost.

Overlaps considerably with Final Speech. Differs from a "Facing the Bullets" One-Liner in that the latter is generally spoken under duress, while this occurs in a (relatively) peaceful setting. The subverted version is usually a Not-So-Final Confession (the character erroneously thinks he's dying but remains very much alive to deal with the aftermath of the confession). Sometimes the person witnessing the deathbed confession will lie to others about what was said. This is a Post-Mortem Conversion.

In evidence law, such a confession (or anything said while dying, really), is a dying declaration

. Dying declarations are not subject to the usual rules of hearsay, and can thus be admissible when they otherwise wouldn't be. The theory behind this is that nobody about to die would have a reason to lie, would they?

Avoid real-life examples. Many celebrities have accumulated any number of myths and rumors of Deathbed Confessions. Putting words in someone's mouth is always more popular after they can't deny the statement.

As this is a Death Trope, the usual spoiler disclaimer applies.