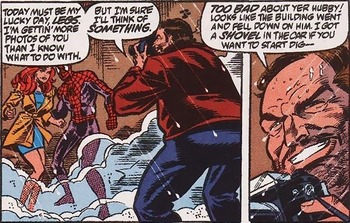 "I work at the paper here as a new journalist. Here the sales come first, and the truth comes last."
— Øystein Sunde, "Smi mens liket er varmt" (translated: forge while the body is hot) (translated from Norwegian)
Advertisement:

The purpose of journalism is to provide citizens with useful, accurate information they can use to make better decisions about their lives, their communities, their societies, and their governments.

Immoral Journalists don't really care about that. At best, they're too lazy to waste time checking if that juicy story is actually true — getting it out as soon as possible to sell more newspapers is what truly matters. Or maybe they exaggerated some details or made up the whole thing because they think it doesn't matter anyway. They may also be plagiarists.

The worst Immoral Journalists are actively malicious, or at least it feels that way. They have zero consideration for their subjects, and will gladly shove a microphone in your face two minutes after you watched your entire family being murdered. They won't hesitate to ruin someone's reputation, even if they know for sure that the allegations are all false. They'll happily churn out propaganda for Corrupt Politicians. In extreme cases, they may cause some kind of disaster just because they think it'd make a good story.

Note that (unlike those Going for the Big Scoop) this trope is not exclusive to journalists. Other people who work in news media, e.g. editors, can fall under it too.

Paparazzi is a subtrope. Old Media Are Evil is a supertrope.

Elliot Carver of the Carver Media Network will do anything for a story, even at the expense of morals.

Elliot Carver of the Carver Media Network will do anything for a story, even at the expense of morals.