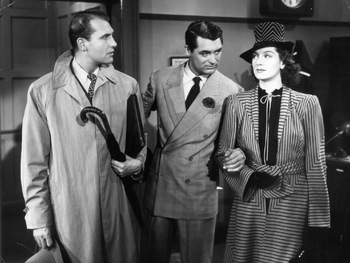 "They ain't human."
"I know; they're newspaper men."
Advertisement:

His Girl Friday is a 1940 Screwball Comedy from Columbia Pictures starring Cary Grant, Rosalind Russell, and Ralph Bellamy, adapted from the play The Front Page by Ben Hecht and Charles MacArthur, and directed by Howard Hawks. It's now in the Public Domain.

When newspaper editor Walter Burns (Grant) learns that his ex-wife and former ace reporter Hildy Johnson (Russell) is about to marry bland insurance salesman Bruce Baldwin (Bellamy) and settle down to a quiet life as a wife and mother, Burns decides he must sabotage these plans. He entices the reluctant Johnson into covering one last story: the upcoming execution of convicted murderer Earl Williams (John Qualen). After that, Burns does everything he can to keep her from leaving, including having Bellamy arrested over and over on trumped-up changes, and having Hildy's mother-in-law kidnapped, amongst other shenanigans.

This film is noted for its sharp, rapid-fire dialogue, and it was #19 on American Film Institute's AFI's 100 Years 100 Laughs and has been selected for preservation in the United States National Film Registry. Today the film is in the public domain (even though the 1928 play it is based on is still under copyright), which hasn't prevented Columbia Pictures from issuing official video releases of the film. The Criterion Collection has also issued it on both DVD and Blu-ray.

The Front Page had earlier been filmed in 1931 (with Adolphe Menjou and Pat O'Brien), and was remade again by Billy Wilder in 1974 (with Jack Lemmon and Walter Matthau) and as Switching Channels (with the setting updated to the TV-news era) in 1988.

Because the film is in the Public Domain, it can be viewed in its entirety here.