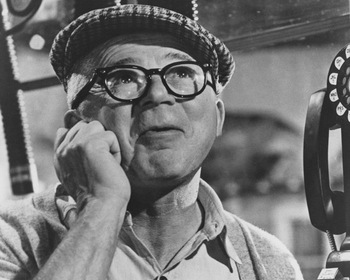 "I'm a writer but then nobody's perfect."
— Billy Wilder's epitaph, referencing Some Like It Hot
Advertisement:

Samuel "Billy" Wilder (June 22, 1906 – March 27, 2002) was an Austrian-American director, screenwriter, and producer, regarded as one of the greatest and most versatile filmmakers of The Golden Age of Hollywood.

He was born in Sucha, Galicia, now part of Poland, but at that time, part of the Austro-Hungarian Empire. In the early '30s, he worked as a screenwriter for German films under the name "Billie Wilder", but after Hitler came to power, he emigrated to the United States because of his Jewish ancestry. He continued his career as a screenwriter there, further changing his name to "Billy Wilder". He directed his first American movie, The Major and the Minor, in 1942, and followed it with a string of critical and commercial hits until the '60s. Wilder equally excelled in dark, cynical noir dramas and satirical or lightly romantic comedies. Always identifying as a writer first, he co-wrote all of his films and won six Academy Awards: two for Best Director, three for Best Writing, and one for Best Picture.