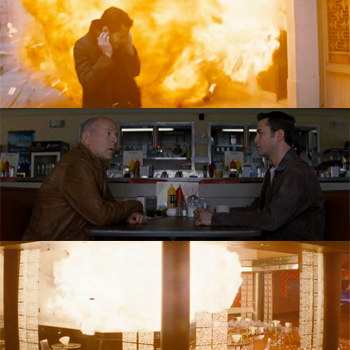 "And if you think that last explosion was something, just wait until the next one."
"It makes the big things look bigger when you've just had a quiet moment. If everything is whizz-bang constantly throughout the whole movie it just becomes nothing. So you have to carefully go to quiet and restrain things so that the other things hit you hard."
— Gareth Edwards on Godzilla (2014)
Advertisement:

What can make a great action film truly great? You might remember some exciting fight, spectacular pyrotechnics, or awesome special effects, but they are not enough. Ironically, what really makes the difference is how good the film is at its quietest drama.

In this kind of scene, there are no expensive visuals or frenetic action, just usually two characters talking about what they believe in, what they care about, their deepest pains, or anything that relates to the stakes of the situation. In these scenes, the film artists are on their own to make them work without the technicians' help and that's where the talent must show through. This is not the same as the purely exposition scene in that there is something deeper displayed here.

In those scenes, you can understand the plot, grasp its theme, or develop a rapport with the characters to make the big scenes matter to you. If the crew can pull off such a scene well to complement the visuals, then it confirms the greatness of the film while the visuals become a nice bonus.

When it really works, it can make the action sequences all the more compelling, because the quiet scenes have allowed you to emotionally invest in the characters and care about their fate.

When that happens, it beats big-budget visuals any day.

When it doesn't work, Narm tends to follow. It also can result in a jarring case of Mood Whiplash.

Often goes hand-in-hand with No, Mr. Bond, I Expect You to Dine. See also Just Here for Godzilla, where the audience still just wants the action scenes no matter how well done the drama is.