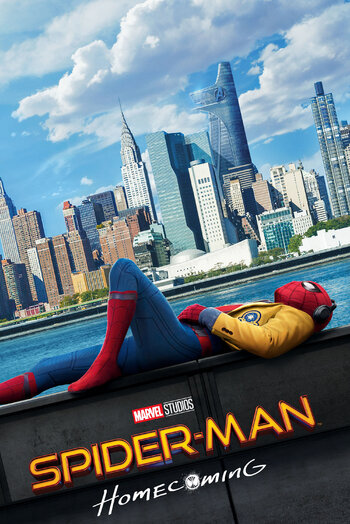 Spider-Man: Homecoming is a 2017 superhero film directed by Jon Watts (Clown, Cop Car), and the sixteenth entry of the Marvel Cinematic Universe as well as the fourth installment of Phase 3. Homecoming marks Tom Holland's second turn as Spider-Man in the MCU and, as the first movie in the MCU Spider-Man Trilogy, is the second Continuity Reboot of the Spider-Man films. In a first for the MCU, Homecoming is a co-production between Disney's Marvel Studios and Sony's Columbia Pictures division.note In the agreement between the two companies, Sony will financially back and receive all profits from all solo Spider-Man movies. Marvel, in return, retains full creative control and will keep the profits from any team-up films that the character of Spider-Man appears in. On top of all of that, it's also the sixth overall installment in the Spider-Man film franchise.

Following his "field trip" battling the Avengers in Captain America: Civil War, New York City native Peter Parker continues trying to juggle his dual life as an Ordinary High-School Student at Midtown School of Science and Technology, and the crime-fighting hero Spider-Man. Now Peter must navigate impressing his new benefactor Tony Stark, getting ready for his high school's homecoming dance, catching bank robbers, finishing his homework on time, rescuing people from building fires, and learning how to talk to girls. Peter's greatest challenge lies in stopping a sinister criminal ring using an experimental flight suit and other high tech equipment to terrorize the city, despite Tony's concerns that he's too young to be putting himself in harm's way.

A sequel was announced for 2019 before Homecoming's release,note Specifically, on the day after the first trailer dropped. That movie, Spider-Man: Far From Home, initially concluded Marvel and Sony's partnership before they renewed it for a third movie, Spider-Man: No Way Home, released in 2021. An animated prequel series entitled Spider-Man: Freshman Year, which will cover Peter Parker's first year as a high school student and his origins as Spider-Man, is currently in development for Disney+, with Jeff Trammell (Craig of the Creek) attached as head writer. Spider-Man also appears in Avengers: Infinity War and Avengers: Endgame, both of which are set between Homecoming and Far From Home.

open/close all folders
Tropes A to E
Tropes F to J
Tropes K to O
Tropes P to T
Tropes U to Z
"Hi, I'm Captain America, here to talk to you about one of the most valuable traits a soldier or student can have: patience. Sometimes, patience is the key to victory. Sometimes, it leads to very little, and it seems like it's not worth it. And you wonder... why you waited so long for something so disappointing... How many more of these?"
Feedback