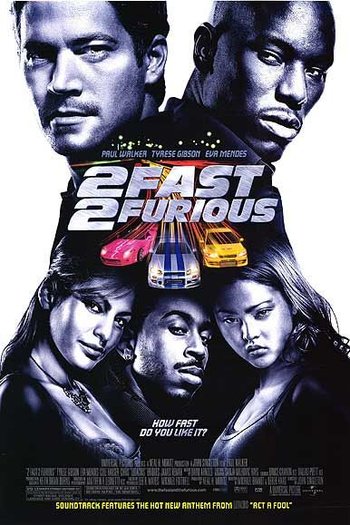 Brian O'Connor: You ready for this?
Roman Pierce: Come on, man. Guns, murderers and crooked cops? I was made for this, bro.
Advertisement:

2 Fast 2 Furious is the second film in The Fast and the Furious franchise. Starring Paul Walker and introduces Tyrese Gibson into the series as Roman Pierce as well as Tej, played by Christopher "Ludacris" Bridges, who would gain more prominence in the fifth movie and beyond. The film was directed by John Singleton and released in 2003.

Brian O'Conner has long since left the LAPD and fled to the streets of Miami, but is coerced to infiltrate a local drug lord's money laundering operation as a runner. He recruits his childhood friend Roman "Rome" Pearce (Gibson) for a second driver, and both of them work to undermine the bad guys and get their criminal records wiped clean while trying to stay alive in the process.