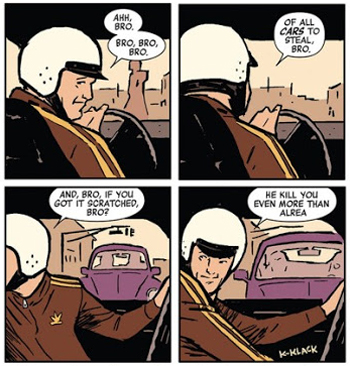 Watch the road, bro.
"I swear you'll be the first patient in the ER with airbag rash on the back of his head."
— Mr. Owl, Daisy Owl
Advertisement:

The tendency of characters in TV shows or movies who are driving to spend a dangerously long time looking at the person in the passenger seat, rather than out the windshield (or ever at the rear-view mirror, which is almost always gone).

This trope is nearly ubiquitous, so use this section to list subversions and lampshade hangings. The reason it is so ubiquitous is because almost never is an actor actually driving and acting at the same time. The vehicle is either on a trailer or being towed behind the camera car - or the actors are in a car set in a studio.

Compare to Drives Like Crazy. Not to be confused with Driving a Desk, which is about visual effects.

In Real Life, taking your focus off the road for even the duration of an extended sneezing fit or to answer a phone call or text or try to control misbehaving children in the backseat is a major cause of serious and fatal (and not-serious as well) accidents, as are other forms of "distracted driving". In fact, distracted driving is even more likely to actually cause an accident than drunk driving below 0.12 with the drunk focused on the road, because to a certain degree of intoxication, a drunk can actually see what is going on around them, if not otherwise distracted, and because distracted driving is far, far more common than drunk driving. If you must do something that will take your full visual focus off the road for more than a few seconds, pull over.

Alternative Title(s): Eyes Off The Road, Driving Without Looking, Watch Where You Drive, Hollywood Driving