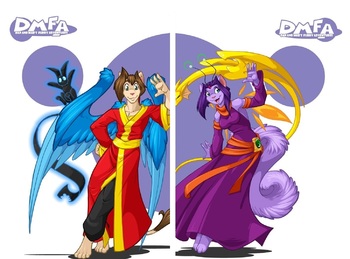 is a comedic, character-focused Animesque Furry Comic, mostly told in a Slice of Life gag-a-week format but with a slowly unfolding Myth Arc and some dark elements in the backstory. It started off as a joke among a group of players in an early MMO (Furcadia) that the author, Amber M. Williams, knew; the cast consisted at first of their own characters.

At first following loosely connected arcs, the main plot could be said to start off in Chapter 11, when Merlitz meets the succubus Aaryanna, who turns out later to be hold a vendetta against his friend Dan. From this will eventually come a series of revelations and connections involving some of the mightiest creatures in the world. However none of this will stop the cast talking about their troubles at the inn of Lost Lake.

It has been running since 1999, though with a hiatus of more than a year.