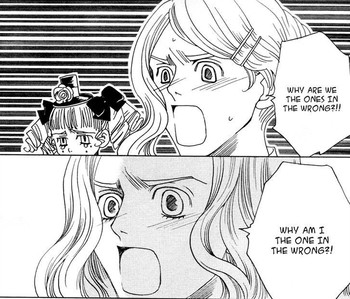 From the inside world to the outside world.
Karen Gillan: The Doctor bites my arm, and I'm not really sure how we're going to do that. Is he actually going to do it?
[cut to Matt Smith grinning broadly]
Matt Smith: Absolutely! I'm going to bite her arm!
— Doctor Who Confidential
Advertisement:

Related to the Gilligan Cut and the Description Cut, this is a comic device that brackets a hard cut with two versions of the same line. The first may be straight or even deadly serious, but the repetition ends up being funny:

"Jilly must be freezing her butt off!"
[Hard cut to Jilly in the forest]
Jilly: I'm freezing my butt off!

Or, on occasion, there will be a bit more irony present:

Mayor: [of the preparations of a ceremony] This is the day that will put our town on the map! This is it!
[Cut to much more sinister happenings in some sort of evil science lab]
Antagonist: This is it.

Note that when used in anime, this bit usually includes a Sneeze Cut from the referred person, because the Japanese are allergic to being talked about behind their backs.

This is Older Than Steam, being a classic trope of farce for several hundred years now.

Often used in the delivery of Hypocritical Humor. Compare with the plain old Ironic Echo, which comes several scenes later, and Strange Minds Think Alike. Another form of Tempting Fate. Not to be confused with Description Cut. Compare Immediate Self-Contradiction. Contrast Twisted Echo Cut, where the echoing scene is unrelated and the echo is coincidental.

Even funnier, when the ocean liner is being attacked, and Eustace and the chair are sent flying... Eustace still refuses to leave his chair. He then spends the rest of the episode complaining, "Where's my chair?"

"Oh, you think everyone's an Indian."