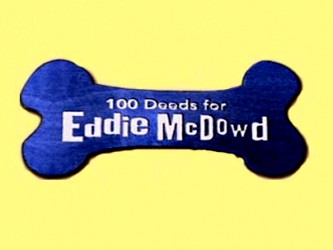 100 Deeds for Eddie McDowd is a show on Nickelodeon in the late '90s and early '00s. The title character was a bully, turned into a dog after messing with the wrong hobo, with the condition that he would only change back if he did 100 good deeds. Aside from the man who put the curse on Eddie, the only person that can hear the dog Eddie talk is Justin Taylor, the last kid that Eddie bullied as a human. Hilarity Ensues.

It was canceled in the U.S. after just 40 episodes, long before Eddie could change back into a human and still having 60 good deeds remaining, due to low ratings.