Used to Be a Sweet Kid 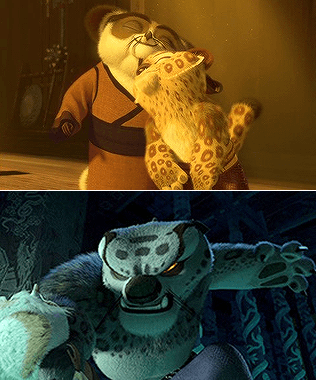 What happened to you, Tai Lung?
"They were kids that I once knew, now they're all dead hearts to you..."
— Stars, "Dead Hearts"
Advertisement:

This applies when a villain or other dark and troubled/troubling character was not so as a child: the trope name also tends to appear as a Stock Phrase in these cases. Works, and audiences, may vary considerably as to what point they consider a character to be past the adolescent stage here, but post-adolescents in general need not apply.

Aversions will usually be notable here, given expectations that Children Are Innocent, or that there's at least some Ambiguous Innocence even when Kids Are Cruel, so people will tend to assume a Start of Darkness must have happened, and that there will be a Freudian Excuse that will explain (if not excuse) all. By extension, this trope frequently applies through subversion, inversion etc. where an Enfant Terrible, Creepy Child, or Ax-Crazy junior initially manages to get past everyone's radar but is actually a little horror from the start. ("And he seemed like such a nice kid"). Often, it is not clear which a character fits under, which in turn often leads to a Flame War, especially if the character is also a Draco in Leather Pants.

Generally, the trope tends to be reserved for villains near the Big Bad end of the villain spectrum, but can also be played for What Measure Is a Mook?. Also, while this is most commonly a villain trope, it can apply to characters who are not so much aligned with evil as troubled, bitter and twisted, cynical, jerky, despairing, lacking in emotions or insane. Or an Anti-Hero. Or just going through puberty. (In the latter case, expect the parents to invoke the trope name.)

When played straight, this trope tends towards Rousseau Was Right, though if other villains and darksiders in the same work do not fall under this trope, Rousseau may have only a partial victory, and the trope is sometimes used as the exception that proves the rule in Hobbes Was Right or Humans Are the Real Monsters scenarios. Also frequently used, straight or otherwise, to make more or less anvilicious points about free will, destiny, individual responsibility, or the moral version of Failure Is the Only Option.

Handled well, this trope can really add depth and complexity: handled badly, especially by combination with a poorly executed Freudian Excuse, it tends to cause Badass Decay and Villain Decay.

Often related to From Nobody to Nightmare, though the character may be of some prominence from an early age, or even from birth. This subset of the trope can be heart-breaking, as when a long-awaited Chosen One turns bad. Also often the precursor to Break the Cutie and Woobie, Destroyer of Worlds. In these cases, expect it to be Played for Drama with extra Tear Jerker moments. It's also often invoked to make the audience Cry for the Devil. If they weren't just a sweet kid, but a Kid Hero, they may be a dark version of Kid Hero All Grown Up.

Sometimes, the "used to be nice" stage may be revealed only retrospectively, often by a third party, and the villain himself/herself may treat the "sweet kid" stage as an Old Shame that undermines their Villain Cred. This last one may be Played for Laughs, as the villain furiously denies their Pet the Dog past, often complete with stomping on cutesy childhood toys and memorabilia. Or it may be Played for Drama in an "I Know You're in There Somewhere" Fight with the good guys.

Compare to She Is All Grown Up, in which the character may have been a sweet kid, but is now a very attractive woman. Compare Used to Be More Social in which the character used to be a social butterfly, but has become introverted and withdrawn. Contrast Reformed Bully, a character who was mean and/or smug while young, but is a much nicer person now, and Former Teen Rebel, a character who was rebellious and immoral while young, but is no longer like that.

Sadly, this trope is Truth in Television, as many people who started out as good ended up becoming malicious and criminal later on in their life, but as this trope deals with a person’s morality, No Real Life Examples, Please!

What was once Shifu's adopted son and greatest pupil. But his ambition and greed turned him into a bloodthirsty monster. He's even the current trope image.

What was once Shifu's adopted son and greatest pupil. But his ambition and greed turned him into a bloodthirsty monster. He's even the current trope image.