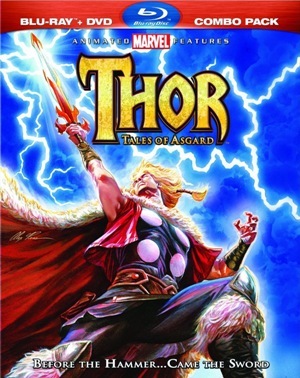 Thor: Tales of Asgard (2011) is a Direct to Video animated film from Marvel Animation and Lionsgate featuring the adventures of a teenage Thor, his little brother Loki, and the Warriors Three as they try to retrieve the lost Sword of Surtur from Jotunheim. Long story short: nothing goes as planned.

In the end, what starts out as a harmless adventure quickly turns deadly, and Thor must now prove himself worthy of the destiny he covets by saving Asgard itself.

The Thor: Tales of Asgard movie provides examples of the following tropes: