Western Animation / The Thief and the Cobbler 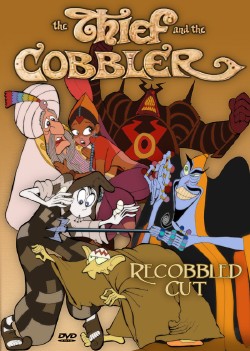 "It is written among the limitless constellations of the celestial heavens... ... that the world which we see is an outward and visible dream of an inward and invisible reality..."
"The idea is to make the best animated film that has ever been made — there really is no reason why not."
— Richard Williams, before losing rights to his film
Advertisement:

The Thief and the Cobbler (also The Princess and the Cobbler, or Arabian Knight, depending on which version you're watching) is a legendary attempt by master animator Richard Williams to create the greatest animated feature ever. At 31 years, it held the record for the longest production time for a motion picture— much of it spent in Development Hell— beating out the previous record holder, Leni Riefenstahl's Tiefland, which took 20 years to make. It has since been surpassed by Orson Welles' The Other Side of the Wind, which took 48 years from the first frames of film to the final cut (unlike Williams, Welles wasn't able to enjoy the end result of his film emerging from Development Hell, as he had died 33 years earlier), though it still stands as having the longest completed production time of any animated movie in existence. Williams envisioned the film as his personal masterpiece (in the traditional sense, as in "the piece you create when you've mastered your medium") and wanted to fill the entire movie with every technique and trick he had learned from the top animators of The Golden Age of Animation, effectively putting on display the ultimate capabilities of hand-drawn animation. It is considered a lost treasure of animation, with many critics calling it the greatest unfinished film of all time.

Here's the plot: in a "golden city" set in a pseudo-Arabian land (although, in one of the versions, they decided to put it in Baghdad), there are three golden balls atop "the highest minaret". Prophecy has it that if the balls are stolen, the city will fall, unless it is saved by the simplest of souls. The balls are stolen by a sneaky, nameless thief, just as a vicious race of one-eyed men (simply known as the One-Eyes) are about to attack the city. The King of the city sends his daughter, Princess YumYum (yes, that is her actual name), out to find a way to stop the encroaching army, and she takes along with her the hero of our story, a meek cobbler named Tack (who has begun to fall in love with the Princess and she with him) as a guide. They are followed along the way by the Thief, who's only in it for the loot.

The movie began as a pet project which Williams and a few colleagues worked on in between profession gigs at his studio in London and was in and out of various stages of production for many years. Investors came and went, initially awed by the stunning, god-tier animation that had been completed thus far, but turned off by Williams' obsessive attention which it required, often resulting in missed deadlines and overshot budgets. Williams, meanwhile, hired and fired animators at will, eventually ending up with a solid team which included Disney legend Art Babbitt and a young Eric Goldberg, both of whom would follow him to his directorial debut, Raggedy Ann & Andy: A Musical Adventure, which Williams took on to help fund Thief. After winning an Oscar for Who Framed Roger Rabbit in 1989, a studio offered Williams the money necessary to finally complete Thief, under the proviso that it be ready by a specific date under the budget provided.

Williams never oversaw the film's completion: he wound up missing the production deadline with the film fifteen minutes short of completion and, as per contractual obligations, was fired from his own pet project 28 years after he had begun it. The project was then farmed out to an overseas company to finish the last fifteen minutes, prompted by competition with a notoriously similar upcoming film, and was severely edited upon completion, turning it from an artful Epic Movie into a Lighter and Softer Disney-esque musical (some overseas-edited editions of the film even advertise it as the Mockbuster version of Aladdin). It was given a small, ultimately unsuccessful theatrical release by Miramax under the title Arabian Knight in 1995.

A few years after the release of the Miramax cut, Williams' personal workprint of the film, which had been smuggled out by some employees after he had been fired, appeared on the internet under the name The Recobbled Cut

under the supervision of Garrett Gilchrist. The cut contains virtually all of the completed animation, as well as pencil tests and storyboards, to create as close an approximation as possible to Williams' original vision, allowing it to finally be seen by the masses. It has developed an extremely strong cult following among animators and animation fans, and has topped many "Greatest Unfinished Films" lists, as a veritable holy grail in the medium of hand-drawn animation. It has seen been passed around all over the internet, sometimes in drastically different forms.

For obvious reasons, Richard was reluctant to talk about the film for many years, refusing to take part in the "Recobbled" version when offered. He would spend the next few years on a remote island in Canada with his wife as he wrote The Animator's Survival Kit. During his famed lecture tour, he went out of his way to let people know that he did not want to talk about Thief, only to move past it. Williams eventually warmed up to it again, screening his own "recobbled" version, subtitled A Moment In Time, along with an art exhibit of his work in LA in 2013, twenty years after his firing from the project. He has gone on record to say

that this is the absolute closest the film will ever get to being finished, as all of the original artwork and film materials for the film are scattered and lost, and it would be unfeasible to track all of it down or recreate it, not to mention the legal kerfuffle he'd need to go through to get the completed footage back from the studio.

Now satisfied with Thief, Williams moved on to another attempt at a personal masterpiece, an anthology film with the working title "I Hope I Live To Finish This", the first part of which, Prologue, debuted in 2015. Unfortunately, since he succumbed to cancer on August 17, 2019, it’s likely we won’t see any more of that project.

A documentary film about Richard's long troubled production of the film, called Persistence of Vision, was released in October 2012 to much positive reception.

This movie (in its various incarnations) features examples of:

"But because I sing with singiness, the dreams I dream I’ll dream. I heart love."

Zigzag is announced walking through the streets.

Zigzag is announced walking through the streets.