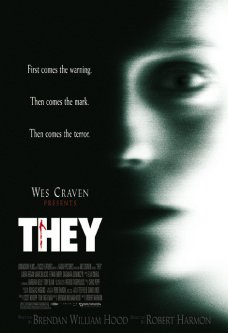 Wes Craven Allegedly Presents: They, but not really.
Advertisement:

They (2002) is a horror movie often thought to have been written, directed, or produced by Wes Craven—who was, in fact, not involved with this movie at all except as an executive producer and a "presenter". It was actually directed by Robert Harmon, a man probably best known for having directed the original version of The Hitcher, and written by upwards of ten different uncredited screenwriters.

Julia Lund is a promising young graduate student, majoring in psychology and nearing graduation, with plans to soon enter the professional world. During a date with her boyfriend, she's disrupted by Billy, a childhood friend who is haunted by a troubled but undescribed past. When she meets him at a diner, he hides a strange mark on his hand and rants that they are coming to get him, describing them only by the effect they have on children and electricity. After coming to terms with the fact that Julia cannot help him, he produces a gun and commits suicide in front of her.