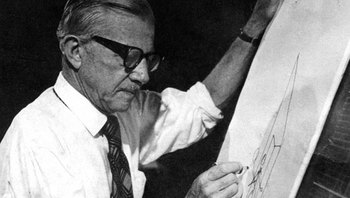 "What's the greatest piece of animation of all time? It hasn't been done yet. Everything we've done up till now hasn't even begun to scratch the surface of what animation can do."
—Art Babbitt
Advertisement:

Arthur Harold Babitsky (October 8, 1907 – March 4, 1992) was a veteran American animator best known for his work at Disney and beyond in a career than spanned more than five decades.

Babbitt began his animation career at the Terrytoons studio in 1929, but later moved to Walt Disney's studio in the early 1930s. His first major assignment was animating the Big Bad Wolf in the Oscar-winning Silly Symphony short The Three Little Pigs. During that time, took up stock character Dippy Dawg and redesigned him to be a slow-witted, yet good-natured yokel whose body movements made him stand out, even giving his fellow animators a famous lecture on how to properly take care of "the goof". As a result, Babbitt gave birth to the lovable character we know today as Goofy.

For Disney's first full-length feature film Snow White and the Seven Dwarfs, Babbitt was given the difficult task of animating the villainous queen, a far cry from Goofy-like characters of the era. During production, he married his first wife Marjorie Belcher, who was the animators' model for the character of Snow White. After Snow White, Babbitt was promoted to directing animator, and he won praise for his work for animating the kindly Gepetto in Pinocchio, the dancing mushrooms in the "Nutcracker Suite" segment of Fantasia and the Delivery Stork from Dumbo.

Despite being one of Disney's highest-paid animators, he was sympathetic towards the lower, underpaid artists at the studio (to the point where he paid an assistant a hefty bonus out of his own pocket) who wanted to seek union representation. He and several other animators joined the Screen Cartoonists' Guild and began questioning Walt Disney's authority at the studio. When Babbitt was suddenly fired in May 1941 for joining the union, it proved to be the final straw for him, and he led what would become the Disney animators' strike. For his part in the strike, Art and Walt became very bitter enemies and, and he sued Walt for "unfair labor practices" in a case that went all the way up to the Supreme Court. Babbitt won the case and, after fighting as a Marine in World War II, returned to the Disney studio. It was clear that he was unwelcome there, and Babbitt soon left for good, and on his own terms, in 1947.

After leaving Disney, Babbitt joined United Productions of America (UPA), a studio created to deviate from Disney's "illusion of life" approach, and became an animator and director. In the later 50s, he became part-owner of commercial studio Quartet Films and later became head of Hanna-Barbera's commercial department. After becoming an animation teacher regarded as a legend in the field, British animator Richard Williams brought him over to his London studio to work at his studio, while also serving as a mentor to him and other young and aspiring animators. There, he animated the Camel with the Wrinkled Knees in Raggedy Ann & Andy: A Musical Adventure and King Nod in the troubled production The Thief and the Cobbler.

Babbitt died of kidney failure in 1992. Shortly before his death, he was contacted by Walt's nephew Roy E. Disney and they ended the long feud. Frank Thomas and Ollie Johnston, loyalists to Walt during the strike, gave their former rival a moving eulogy at his funeral. He was awarded the Winsor McCay award in 1974 and was named a Disney Legend in 2007.