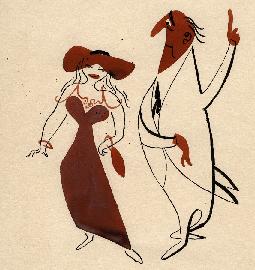 "Rooty Toot Toot" is a 1951 UPA animated short (distributed through Columbia Pictures as part of the Jolly Frolics series), directed by John Hubley. The short depicts the trial resulting from the old Murder Ballad "Frankie and Johnny", with prosecution and defense depicting their rival reconstructions of the crime to a hot jazz version of the tune. Despite the fact that The Bartender and her rival, chanteuse Nelly Bly, testify against Frankie, she is, through her shyster lawyer's machinations, brought in "Not Guilty" — until she proves to the jury very thoroughly that their estimate of her deadliness is mistaken, by means of solvitur ambulando.
Advertisement:

The animation is, as was customary at UPA, extremely stylized, making use of Limited Animation techniques to pare the story down to its essence.