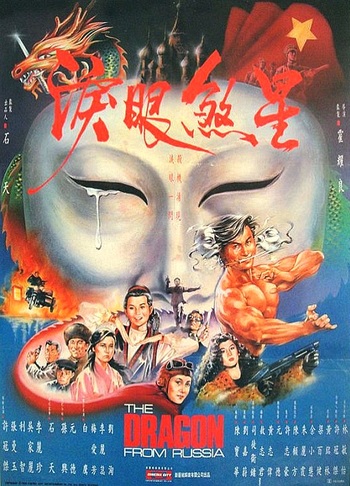 The Dragon from Russia is a 1990 Hong Kong movie directed by Clarence Fok, based on the popular manga Crying Freeman, starring popular Canto-pop singer Sam Hui, Maggie Cheung shortly after her breakthrough role in As Tears Go By, and Nina Li (wife of Jet) who's at that time in her phase of portraying Dark Action Girl characters.

Yao Lung (Sam Hui) and May Yip (Maggie Cheung) are orphans living in Russia, who promised to be with each other no matter what happens and will be together forever when they grew up. But when Yao Lung witnessed an assassination, and is subsequently captured alive by the 108 Dragons Cult behind a series of killings happening all over Moscow, he is forcibly brainwashed against his will to forget his previous life and trained to become an assassin under the cult. Now a ruthless, masked killing machine, Yao Lung ends up remembering his past with May once more, after she assumed he was dead, when she inevitably crosses path with him.

It is interesting to note that the movie is released a few months after Killer's Romance, starring Simon Yam, another Hong Kong film also inspired by the Crying Freeman manga, although both films takes on a different approach in storytelling: Killer's Romance tends to go directly into the action with a more straightforward storyline, with the protagonist already a seasoned hitman from his first second of screentime, while Dragon From Russia provides a somewhat complicated origin story with its longer running time and more characters to develop, using its extended runtime to flesh out the protagonist's and various supporting characters' backgrounds.