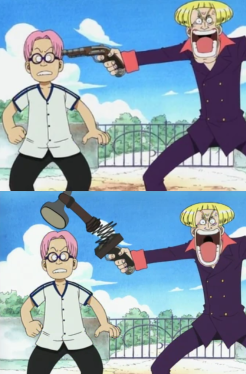 Top: The original.
Bottom: The 4Kids dub.
Carl Macek: So you like Robotech?
Greg Ayres: I like Macross.
Macek: Oh... So you must think I'm the Antichrist, huh? (Beat) Well, they always shoot the first guy past the finish line.
— Greg Ayres recounting his first meeting with Carl Macek.
Advertisement:

A strongly held opinion that a significant Dub-Induced Plotline Change of an anime is a mockery of the original work.

Pronounced similarly to "massacre", the term was coined by anime fans from the name of producer/writer Carl Macek

, whose early "free adaptations" of anime frequently bore little or no resemblance to the original Japanese stories. His usual procedure was to dispose of the original script entirely, and write his own from scratch. This was no Samurai Pizza Cats, however.note That series had entirely new English scripts created with the blessing of the author. He would often combine two or more unrelated series simply in order to have enough episodes to fulfill a syndication deal, the most famous (and successful) of these resulting in Robotech. He is particularly reviled for the seemingly xenophobic ruthlessness with which he purged any hint of Japanese culture — what he euphemistically called "ethnic gestures" — from the series which he adapted.note Macek later claimed that many of these changes, including his having to splice together three different series to create Robotech, were a case of Executive Meddling; he was required to force the show to fit syndication-length guidelines, without having complete scripts for any of them, while still making it compelling enough to sell the accompanying toy lines. Trying to tie the three shows together by giving them a unified script was his attempt at meeting these conditions; obviously, this didn't work as well as he hoped. As to the charges of removing "ethnic gestures" from scripts: to be fair to Mr. Macek, there is some evidence that his original plan was to have Hikaru Ichijyo/Rick Hunter remain ethnically Japanese, naming him "Rick Yamada". It is also very evident that the simple, straightforward solution of presenting Robotech as an anthology was, for whatever reason, not considered a viable option.

Fans, with some justification, feel that this practice is disrespectful to the original content's creators, as the series is being treated as a pure marketing product rather than really "getting" the draw. The practice has fortunately dwindled since the 1980s because of the utter hatred modern fans hold for it, as well as the greater accessibility to the original product (although consistency can flounder at times). The importing companies have realized that the quirks were what attracted many viewers in the first place. The increasing number of import companies born from fan groups, like ADV Films, may also have something to do with it. The practice has also largely faded, however, because ironically doing things like what Macek did — replacing whole scripts and renaming whole casts, writing entirely new musical scores, having to spend days editing and re-cutting a show — is actually significantly more expensive and time-consuming than a straight dub, especially now that the original source music and the like can be stored digitally and easily layered back into an English track. With the margins of the Western anime market being fairly tight, it simply makes more sense to give the fans what they want.

It's worth noting that there is in fact also something of a "sliding scale of Macekre" here. On one end of the scale, you have shows that were, objectively, pretty severely changed — but the changes were done by people who understood both the core appeal of the show in question, liked what they saw, and the changes were more to make the show even possible in another market — a Woolseyism. A lot of people consider the anime brought over by World Events Productions in the 1980s to be an example of this — GoLion and Sei Juushi Bismarck went through a heap of changes, but Voltron and Saber Rider and the Star Sheriffs were both quite popular and a lot of fans would contend that the shows still "get" the fundamental draw while avoiding traps that would have made them unairable in 1980s America otherwise (such as GoLion's occasional massive violence). On the other end of the scale, of course, are things like Tranzor Z (the edited version of Mazinger Z), which was done without any care whatsoever and without understanding why people like the show at all. Invariably this results in a failed product that buries a franchise in a market for decades and leaves licensors furious. Therefore, it's possible to still change a show dramatically in adaptation and not "ruin" a franchise. However, it takes a lot of skill and care, and too many times that just doesn't happen, leading to some of the more onerous examples.

It's important to understand this phenomenon in the context of its time. What modern anime fans might not realize is that at the time, there simply was no Western fanbase for Japanese animation in its pure form and in fact the term "anime" itself was not commonly known to Westerners at all. For many years, a variety of companies simply saw Japanese animation as a cheap way of producing disposable children's programs for syndication. For these companies, the process of buying the rights to Japanese shows, which at that time had no real foreign market, so international rights were cheap, editing, and redubbing them was far more inexpensive than actually producing original animation. This was typically done with no respect whatsoever for the original material, as it was intended for a children's audience typically on weekday mornings and afternoons where they competed with reruns of original series produced for the more profitable Saturday morning timeslot.

Over the years, a small but growing contingent of fans began to recognize what remained of the quality of the original works in the stripped versions they were exposed to, and endeavored to reconstruct as much as possible of the original stories and characters from what they had and learn as much as possible from the scant translated information available to them. This grew to include research into the original Japanese material by those few capable of translating and understanding the language, and fanclubs were born. At the time, the term "anime" wasn't known yet and the fandom was called "Japanimation". As these fanclubs grew, they began to advocate the position that if Japanese material could be translated and presented in such a way that the bulk of the original spirit was retained, it would be of excellent storytelling quality and could find an audience. Considering that market proof for an audience for non-comedic animation that skewed older than the 8-12 demographic was, at the time, basically nonexistent, this was a difficult sell indeed.

Until Robotech did it, even the Japanimation fans who had advocated so hard for "as faithful as possible" translations were unsure that the concept could be financially successful. Even the concept of showing a syndicated animated series in proper episode order was at that time unprecedented, as were things like actually allowing the concept of death to be handled on screen. What Macek did was a huge risk, and thankfully it paid off. Unfortunately, Harmony Gold apparently didn't want to credit the original creators or animators who were the real reasons for the success of Robotech.note Shoji Kawamori, Noboru Ishiguro, Sukehiro Tomita, Haruhiko Mikimoto and Ichiro Itano from the Super Dimension Fortress Macross side, and Yoshitaka Amano and Shinji Aramaki from the Genesis Climber MOSPEADA side. Robotech not only found its audience of older animation fans, it won awards and opened the eyes of the Western world to the possibilities of "grown up" animation. Sure, it's easy to look back now and criticize it for what it's not, in context of modern material that has been the beneficiary of the revolution it began, but in the context of the time, it was nothing short of radical and groundbreaking.

Historically, Speed Racer, Star Blazers (another series where episode order is crucial to the story), and Voltron led to Robotech, which in turn led to AKIRA. Without those groundbreaking early steps, the later ones would have been impossible.

Over the years, the Macekre has become a Discredited Trope as syndicated television has lost its luster following the rise of cable and on-demand streaming. Likewise, companies that were prominent for heavy anime edits in the 1970s-2000s have either closed their doors or left the industry, while anime distributors who produce faithful dubs, even for children's television, have taken their place.note Power Rangers, while not an anime, seems to be the sole exception today, likely because to do so would be to produce a show that was very much not Power Rangers any more. The rise of the internet (and to a certain extent the easy accessibility of Scanlations and pirated fansubs) may have played a role as well; many series now have an established fanbase even before their official release, limiting how much Cultural Translation and other drastic changes can be applied if that base is going to be appealed to.

Contrast Woolseyism (where the changes are seen as more organic and workable), Gag Dub (where nearly the entire dialogue is rewritten from the ground up, and the changes are for intentionally comic purposes, often making fun of the original), and Good Bad Translation. See also Streamline Pictures, which Macek founded.

Not to be confused with Bowdlerise, where the changes are in order to make the work in question more "acceptable" for the audience (non-controversial parts might be faithfully adapted). That said, such changes might contribute to a work becoming a Macekre in the eyes of some audiences when done badly.

No examples, please. This page describes a common emotional reaction to Dub-Induced Plotline Change and Frankenslation; examples of such practices can be found on that page. In addition, keep in mind that Tropes Are Tools. Some people use such dubs as a Gateway Series, and the virulent fan reaction against the dubs may puzzle those not familiar with the original version, or even perhaps those that watched the dubs first. Also, the sliding scale of Macekre varies from person to person; what one may consider bad changes, another may not mind quite as much.