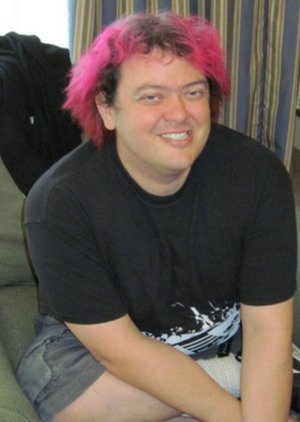 Gregory Scott Ayres (December 7, 1968 in Richmond, Virginia, USA) is an American voice actor best-known for voicing anime characters. Ayres started out as a fanboy of anime who was mentioned to ADV film directors.
Advertisement:

With his constantly color-changing hair, this VA has attended more than one hundred and twenty anime conventions as a guest, and countless others as a fan. However, in February 2009, Greg suffered a mild heart attack while attending IkkiCon in Austin, Texas, which some have attributed to his near non-stop schedule. Greg Ayres is recognized not only for his dub work in popular anime, but also for his multi-talented and charismatic personality at anime conventions. Occasionally his surname is listed as Ayers instead of Ayres, however this spelling is incorrect as his legal name is "Gregory Ayres".

At most conventions he typically holds a panel on why fansubs hurt the anime industry. He is also known for being a DJ at dances and raves that conventions host.

Greg has enjoyed playing Kaworu Nagisa from Neon Genesis Evangelion and has said that he is one of his favorite characters.

His older brother, the late Chris Ayres was also a voice actor/director.

Due to distinctive high-pitch voice (which is unusual for a man in his 50s), he is often cast as young boys, often either Butt Monkeys, cute little boys, or Kid Heroes. In fact, his voice is high-pitched enough to voice young boys that can be as young as 8-years-old.