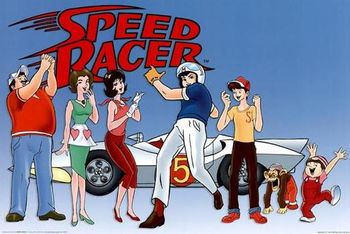 Here he comes...
"Meanwhile, a secret meeting was being held secretly."
— Narrator
Advertisement:

English title of the Tatsunoko Production anime series Mach Go Go Go! (based on Tatsuo Yoshida's manga of the same name), and one of the best remembered anime series for several generations of fans and detractors alike.

Speed Racer (Go Mifune) is the young driver of the Mach 5, an incredible supercar designed by his father "Pops" Racer (Daisuke Mifune). Speed would race dangerous routes against dangerous people and come out on top with his "girlfriend" Trixie (Michi Shimura) trailing him in a helicopter and his little brother Spritle (Kurio) and his pet chimp Chim-Chim (Sanpei) frequently stowing away in the trunk.

The "Mach Five" ("Mach Go" in Japanese,note Or simply, "The Mach" yielding the pun in the original name) had an array of gadgets more at home on Bond's Aston-Martin than on a racing vehicle, like autojacks,note Meant more for maintenance, but frequently used to make the car jump. a spy robot, underwater capabilities and a trunk (which even street-legal sports cars often lack).note Though at the time a sports car actually did have to have a trunk to compete at LeMans.

The pun in the original title comes from the triple meaning of the sound "go" in Japanese — the number "five", a denotation for the number or name of a machine (Mach Go-Go means the Mach Type 5 — the same can be seen in Tetsujin 28-go), and the English "Ready, set, go". Speed's Japanese name is also "Go Mifune" (hence the "G" on his shirt).

The show is notable for being one of the very first anime localized in English for US television, all the way back in 1967, following only Astro Boy and Kimba the White Lion. It was by far the most successful and well-known series for decades, and practically defined anime (or "Japanimation," as it was known at the time) in America until around the mid-90s.

Speed Racer is remembered by Americans for its goofy character designs, limited animation and a very low-quality English localization, courtesy of Trans-Lux and Zavala-Riss Productions, as well as its memorable characters and over-the-top sensibilities. The show is both fondly remembered and reviled by many anime fans not for introducing anime to a wider audience, but for coloring its general image at the time. Speed's effeminate look, the way the dubbing actors have to race through the dialogue and narration to fit in all the exposition and keep up with the lip flaps, and the long sequences without movement all combine to create a style that defined not only this show, but the view of anime in general for generations of Americans.

There was a American-made Speed Racer cartoon in the early '90s titled The New Adventures of Speed Racer, which wasn't well-received. Four years later, there was a Japanese-made remake in 1997 with updated versions of the characters and vehicles, but numerous changes to its source material. Its English adaptation was produced by DIC and titled Speed Racer X, but was short-lived thanks to a lawsuit between DIC and the American-based Speed Racer Enterprises.

The most amusing appearance of Speed Racer in America had to have been in a series of tongue-in-cheek commercials for ESPN and GEICO Insurance. One of the ads for ESPN featured real NASCAR drivers complaining about how hard it was to compete with Speed, and showed actual race footage with the Mach 5 matted in; another featured NASCAR officials trying to determine if the Mach 5 was suitable for competition. (The decision? No, it was too powerful. "NASA might accept it, but not NASCAR.") An ad for Geico involves Trixie (from a helicopter) telling Speed (driving in a race) that she saved money by switching to Geico.

SRE intended to revive the whole title into a new franchise in time for the anime's 40th anniversary. The Wachowskis wrote and directed a major motion picture based on Speed Racer in 2008, which was met enthusiastically by some fans, but failed to impress critics or do well in the box office. A week before the film's release, Nicktoons premiered yet another American television adaptation called Speed Racer: The Next Generation to play up the hype for the film. The second season premiered 3 years later.

Speed Racer Enterprises' rights to the franchise expired on May 31, 2011. After two lawsuits issued in 2012 between Tatsunoko and SRE were dismissed, the former company announced in a press release issued on December 6, 2014 that all rights to Speed Racer reverted to the studio. On May 25, 2015, Tatsunoko announced that they were developing a new Speed Racer anime series, in addition to a new licensing program to reintroduce the franchise. In August of that year, the original series was licensed

by Funimation. Funimation gave the English version of the series its first Blu-ray release (and a DVD re-release) on May 30, 2017. A collector's edition, with the original Japanese version of both the original series and the 1997 remake, was released on November 3, 2017.

This is the standard for Speed Racer episodes.

This is the standard for Speed Racer episodes.