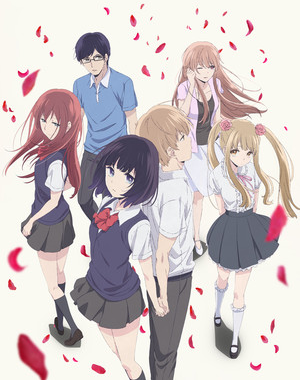 Hanabi Yasuraoka and Mugi Awaya appear to be the perfect couple. They've been going steady for a few months, and are all over each other. This is the ideal that others strive for.

If only it were so simple. The truth is, Hanabi and Mugi have no interest in each other. Hanabi is actually in love with Narumi Kanai, the school's language teacher and her childhood friend. Mugi is infatuated with Akane Minagawa, his tutor in middle school, and now just started as a music teacher. Knowing that their true love is out of their reach, Hanabi and Mugi are only together to satisfy each other physically. Rounding out the cast are Sanae Ebato, Hanabi's classmate and someone who has a crush on her, and Noriko Kamomebata, Mugi's childhood friend, who happens to have feelings for him. And so, the stage is set for a tale of twisted romance.

Kuzu no Honkai, or Scum's Wish, is a 47 chapter manga series written by Mengo Yokoyari. An anime adaptation by Lerche began airing in January 2017. A sequel manga that acts as an epilogue for the characters, Kuzu no Honkai -decor-, began serialization in late 2017, and ended in 2018 with 7 chapters.