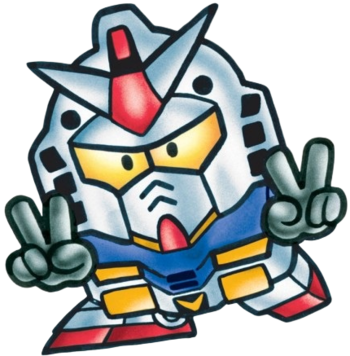 The face that launched a thousand spin-offs...now scrunched up and with pupils!
"Get ready for Gundam like you've never seen it before! ...Really cute and tiny!"
—Toonami Promo for SD Gundam Force
Advertisement:

Everyone knows about Gundam, one of the big name Anime franchises out there. A gritty mix between a space opera and a war drama, with angst and death always around the bend. So how about instead of that, we talk about something a little more wacky and fun?

Starting with a contributed illustration to "Model News" magazine by Nagoya junior high school student Koji Yokoi in the 1980s, which would then lead to Koji serializing SD Gundam 4 frame comics for said magazine, SD Gundam (SDガンダム) is a sub-franchise to Gundam focusing entirely on Super-Deformed mechs.

In spite of receiving negative attention from those who don't consider it "true" Gundam nowadays, the toys were actually very popular in the late '80s-early '90s, to the point where sales from the SD Gundam franchise were actually better than everything else Gundam-related at the time, and its popularity even led to a bunch of Super-Deformed shows such as the Mashin Hero Wataru Series and Lord of Lords: Ryu Knight, as well as Super Robot Wars (In fact, Super Robot Wars used the SD Gundam designs for Gundam until Alpha).

Although it started off parodying the main series, over the years separate continuities have been made featuring the main franchises mechs (And in some cases even the human characters) in different settings, like a Sengoku war or a medieval fantasy.

Works include the following:

Please note that we aren't including SD Gundam G Generation or SD Gundam Capsule Fighter into the list because while they do feature SD mechs, they're more crossovers for the main Gundam works (Characters from BB Senshi Sangokuden have appeared in both, however).

Tropes associated with the SD Gundam franchise include: