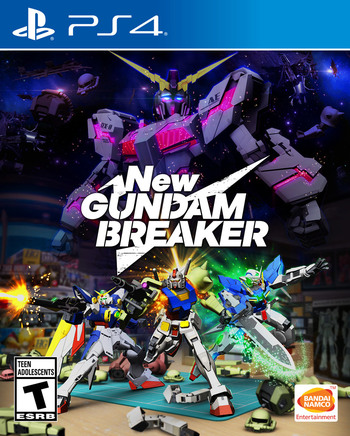 New Gundam Breaker is a Gundam-based video game on the PlayStation 4 and Steam-based products, released in 2018. Though the fourth entry to the Gundam Breaker franchise, this is the first game to make it to Western countries.

You are a transfer student to the prestigious Gunbre High School, a school in Japan dedicated to creating and improving Gunpla builds. However, your first day takes a strange turn when you confront a member of the Student Council-backed Shield of Laplace, becoming Enemy #1 to the Student Council, who hold the entire school in its grip. Now, it's up to you and your plethora of beautiful female student allies to take back the School from these ruthless bullies the only way how: by beating up their toys with your own toys!

New Gundam Breaker hosts a plethora of famous Mobile Suits from throughout Gundam history, from the RX-78-2 of Mobile Suit Gundam to the AGEII Magnum of Gundam Build Divers. Find your favorite parts, mix and match, go out and crush your enemies!