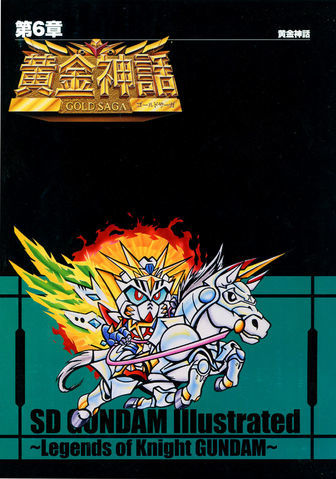 Shin SD Gundam Gaiden: Gold Saga is a Cardass series in the Knight Gundam series released in 1995, as well as the second entry the Shin trilogy.

Superior Dragon sacrifices himself to protect the Saddrac World from a Corona Nova, a strange occurrence that causes the sun to expand and turn the land into a burning inferno. His remains, the Gold Soul, then spread its power to ten chosen people, two of them being Knight Shine Gundam and Knight Domon. With this newfound power, they partner up and "Unite" to control War God Machine King of Heart to fight against the new evil Death-Superior Clan.

The story focuses on a return to the kingdom of Lacroa, and interestingly enough, would introduce human characters who could turn into Gundam a la Tokusatsu heroes (This would later be expanded upon in the next story). Its characters are based off of Mobile Suit Victory Gundam and Mobile Fighter G Gundam.