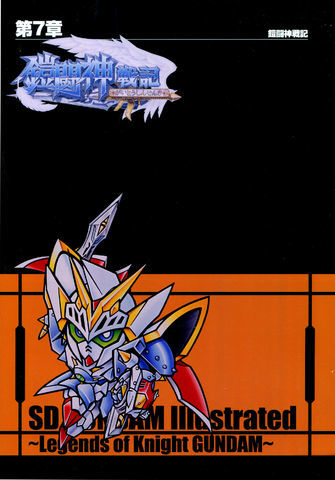 Shin SD Gundam Gaiden: Gaitōshin Senki is a Cardass series in the Knight Gundam series released in 1996, as well as the third and final entry the Shin trilogy. Although it only went up to three chapters originally, a fourth chapter was released as part of a complete box set in 2010.

In the beginning of the Saddrac World, the god Superior Kaiser fought and sealed away an evil god known as Barockgun. Countless years later, An archaeologist named Treize of Romafeller is seen digging in a former machine soldier battle ground. There he uncovers Barockgun, and discovers that the angel princess, Relenia, was key to unlocking its seal, and so forms an army called "Genesis Army OZ World" to control machines known as "D-Dolls" to assault the Union Clan Army. While Relenia was escaping her two angel bodyguard brothers, the older brother, Millardo, was defeated, while the younger brother, Heero, was blessed by Superior Dragon to transform into Knight Wing Gundam and pilot the Armored War God. From this moment, Heero must travel the world to find the other four controllers blessed by Superior Dragon to combat against and beat OZ World.

This story takes the concept of a human-type character that transforms into a Gundam-based form from the last story and expands upon it, making them the main stars. Its characters are based off of Mobile Suit Gundam Wing and New Mobile Report Gundam Wing Dual Story: G-Unit.