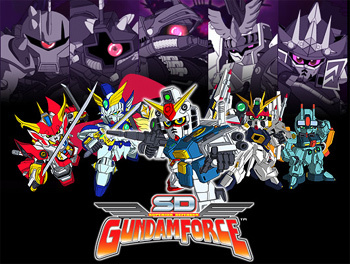 "Get ready for Gundam like you've never seen it before! ...Really cute and tiny!"
—Toonami Promo

SD Gundam Force, the SD officially standing for "Superior Defender", but also for "Super-Deformed", a term used for a long-running series of Affectionate Parodies, is a CG anime series based on the Gundam metaseries. It ran for two seasons, but ended on a full course.

The city of Neotopia is a peaceful place, where the humans live in harmony with Mobile Citizens, small robots between three and four feet tall that look a lot like Mobile Suits. A young boy named Shute finds himself at ground zero of an invasion by the Dark Axis, an army of evil (and equally tiny) robots who seem determined to turn everything to stone. He is rescued by Captain Gundam, A robot styled after the Gundams of the Universal Century universe (particularly the GP-01). After beating back the invading forces, Captain suddenly shows up at Shute's house in a civilian guise, saying his commander wanted him to get experience with civilians, and he decided to start by being Shute's friend.

During the battles against the Dark Axis, Captain meets with two other warriors from parallel universes: Zero, the Winged Knight, a magic-using warrior from the world of Lacroa, and Bakunetsumaru, A Samurai from the world of Ark.

Two video games were produced, though the PlayStation 2 game, SD Gundam Force Showdown, is more noteworthy for introducing the dimensional pirates of DeScar, Expies of V Gundam's villainous Zanscare Empire, as well as more Expies of more machines from the primary three worlds involved. There was also a manga retelling of the series, as well as a promotional manga called SD Gundam Force Gaiden, neither of which were released in the US.

Now with a recap page, under construction.