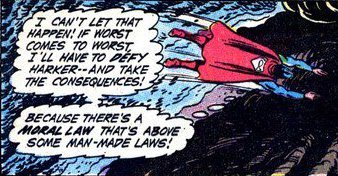 He doesn't go out of his way to disobey laws, but if he has to choose between "right" and "lawful"...
"I recognize that the council has made a decision. But given that it's a stupid-ass decision, I have elected to ignore it."
— Nick Fury, after the World Security Council orders him to nuke Manhattan, The Avengers
Advertisement:

So the Big Damn Heroes are about to set off to Save the World. Not so fast, red tape and bureaucracy are standing in the way of the world's last hope. Well, there's only one thing to do. Ignore the orders of the Obstructive Bureaucrat and/or Corrupt Bureaucrat, then go Save the World anyway. This is, after all, a Matter of Life and Death.

Other, less dramatic examples are usually helping someone out when the rules say that you shouldn't. Or obeying your Curious Qualms of Conscience rather than your careful instruction in right and wrong.

However, when a Lawful Good character has to choose between order and what's right, they may break Lawful rather than Good and end up on this path. Some particularly scrupulous types will even willingly accept punishment afterward; this is called "civil disobedience". More often, though, they're Saved by the Awesome.

Applying this trope does not mean that the ends justify the means, but rather that the person acts compassionate and follows his conscience even when the rules would forbid it (or to put it another way, they do justify the means, but the means usually aren't very terrible). When a Knight Templar attempts this, they are likely to go Jumping Off the Slippery Slope Doing What They Had To Do instead — see Tautological Templar and Totalitarian Utilitarian (formerly named The Road To Hell Is Paved With Good Intentions).

A good aligned Cowboy Cop/Military Maverick will almost certainly invoke this trope at least once. Doing this is often the way to pass a Secret Test of Character.

Since other characters may justifiably believe that law and order is a good thing, this trope can result in a Good Versus Good conflict.

Can be the cause of Awakening the Sleeping Giant if a group's new leaders decide to break with tradition. If the rules are such that the character is already on the run from the law, see Dudley Do-Right Stops to Help. If it involves directly disobeying a direct order of a superior officer in the armed forces, it's The Mutiny. The Chaotic Good are the personifications of this element. Neutral Good characters consider this trope in their options but may or may not elect it. Lawful Stupid may ignore this to a fault.

They can go even Beyond the Impossibile, if they are powerful enough to surpass the almighty laws of an Omnipotent Being.

When Jin's less honorable tactics become too much, Shimura tries to get him to pass the blame onto Yuna. Having taken such extremes to protect Tsushima and unwilling to out his friend, Jin embraces his new self.

When Jin's less honorable tactics become too much, Shimura tries to get him to pass the blame onto Yuna. Having taken such extremes to protect Tsushima and unwilling to out his friend, Jin embraces his new self.