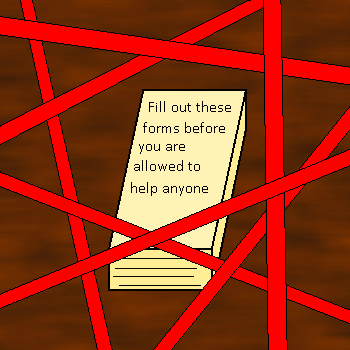 Too much red tape. And that's if you're allowed to do anything in the first place.
"They are one of the most unpleasant races in the Galaxy - not actually evil, but bad tempered, bureaucratic, officious and callous. They wouldn't even lift a finger to save their own grandmothers from the Ravenous Bugblatter Beast of Traal without orders signed in triplicate, sent in, sent back, queried, lost, found, subjected to public enquiry, lost again, and finally buried in soft peat for three months and recycled as firelighters."
— The Hitchhiker's Guide to the Galaxy's entry on Vogons
Advertisement:

So you've seen a reason to launch a great rescue operation. There's one problem. If you went all out with helping you'd be less effective than if you were holding back. Reasons include:

A key aspect of this is that The Hero stays within or at least attempts to appear to stay within the limits given. Appearing to stay within the restrictions is common if the restriction is Operational while launching Secrecy in response to the limits. For Secrecy, it's rarely known exactly how much it's possible to do without someone becoming suspicious. A common trend is that secret operations escalate over time as The Hero figures out that it's possible to pull it off and how to keep the secret.

May involve Obstructive Code of Conduct or Obstructive Bureaucrat. Another likely situation is any rescue effort La Résistance is running in The Empire. The restrictions can come from any side. Either way the obstructions go further than the other characters having a case of the Bystander Syndrome.

A common outcome of this is a Heroic BSoD. The Hero can blame the authorities for putting up the restrictions or themselves for not doing more to invoke Screw the Rules, I'm Doing What's Right!. Or both. This trope is at its core both a betrayal of what heroes, especially the idealistic kind, expects from society and a forced betrayal of their own sense of morality. Can lead to Survivor Guilt among those saved.

See also Underground Railroad and Samaritan Syndrome. Contrast No One Gets Left Behind. Super trope of Bruce Wayne Held Hostage.