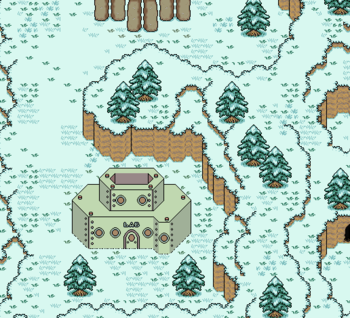 Some scientists (and their employers) are perfectly okay with their research being conducted in slick, brushed steel laboratories situated in corporate skyscrapers high above major population centers. However, some experiments are a little too volatile for an urban setting. Sometimes, this is because the need for secrecy outweighs the convenience of working in the heart of a city; more often, it's because the subject matter is simply too dangerous to be allowed anywhere near the general populace in case of an accidental release.
Advertisement:

So, in the interests of avoiding media attention and collateral damage, the laboratory is situated in an isolated spot somewhere off the beaten trail, where the experiments can be conducted as safely as possible. Possible locations include deserts, jungles, deep caverns, the bottom of the ocean, the surface of another planet, or deep space itself. For good measure, if there is some kind of settlement in the vicinity, it'll often be a small town at the most and — implicitly — populated by people that won't be readily missed.

Such labs can be run by a government, a corporation, a heroic team, or maybe just an average joe or jane performing good old-fashioned DIY mad science. Expect some kind of Black Site to be involved in the case of government labs. Almost any field of research can be studied here, as long as it's dangerous enough, but weapons testing is a popular one (see Testing Range Mishap for why).

May count as a Scienceville if the city in question is sufficiently isolated.

Compare and contrast Eerie Arctic Research Station, which is usually isolated for the sake of scientific research that can only take place in the Poles.