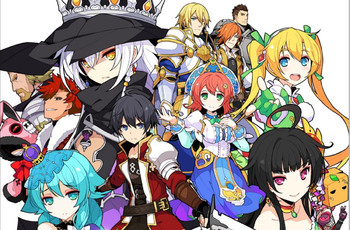 Long ago in the land of Regnant, God lamented mankind's arrogance and took from them the art of song as retribution. Since that day, the only people who can sing are magical beings called "Witches," who use their songs to weave miracles. And a thousand years ago, when mankind lost faith in God, she sent down her angels to punish humanity until the hero Elcrest and the Beast King Xeno, along with their five Witch companions, went to the Moon, where God lives, and quelled her wrath.
Advertisement:

Alto was just a simple hunter for his village without his memories, living with his adoptive sister Lisette and her mother. One morning he wakes up hearing a beautiful song and upon investigating finds a Witch calling herself Hilda. But then Hilda reveals herself to be the dreaded Witch of Destruction, and uses her song to crystallize Alto's village. As the only survivors of the attack, Alto and the newly-awakened Water Witch Lisette join the 9th Regiment of the Royal Knights, a group led by handsome warrior Klaus dedicated toward finding Regnant's Witches and stopping Hilda's nefarious plans. Can Alto and the 9th Regiment unite the Witches to stop Hilda from using her Song of Ruin to destroy the world?

Stella Glow is a Strategy RPG for the Nintendo 3DS and the swan song of Image Epoch, being the final game they made before closing, as well as a Spiritual Successor to their well-known Luminous Arc series of Strategy RPGs. A unique aspect of this game is the Conduct system, in which Witches can sing songs that grant powerful effects such as healing the entire party or stopping enemies from moving. As such, it features an All-Star Cast of popular voice actors and singers. The game was released in Japan in June 2015, North America in November 2015, and Europe in March 2016. A demo of the complete prologue is also available.