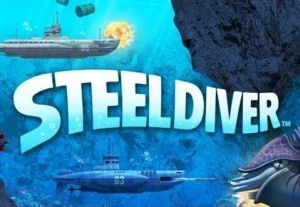 A 2.5D side-scrolling submarine simulator from Nintendo for the 3DS. You pilot one of three subs (an adorable little compact sub that can fire torpedoes vertically, a medium-sized submarine which is Jack-of-All-Stats, and a four-torpedo-tube heavy sub) through a variety of stages, dodging depth charges, naval mines, and enemy submarines along the way. A gyroscope-enabled periscope minigame and a multiplayer turn-based strategy mode round out the package.
Advertisement:

In 2014, a (mostly) free-to-play sequel, Steel Diver: Sub Wars was released. Unlike the first game's 2.5D presentation, Sub Wars is in full 3D with a first person view from the sub. The main focus is the game's surprisingly fun 4 vs. 4 multiplayer, which some have likened to Ace Combat, if Ace Combat was underwater and about submarines. It helps that the multiplayer (and the first two missions of the game's single player campaign) are free to download, with the rest of the single player and a few extra subs being unlocked for 10 dollars.

The following tropes appear in this game: